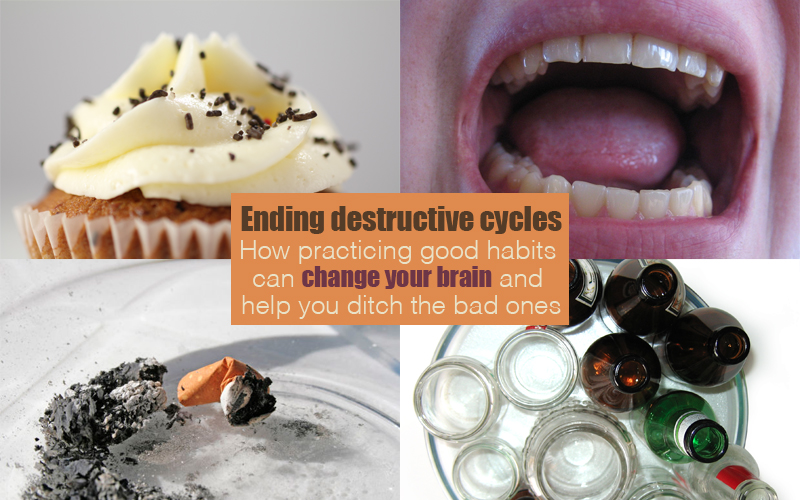 How changing habits can end destructive cycles in our lives

In this essay, author and therapist Stephen Stosy reflects on his prior belief in “the big transformation” that therapy makes possible. After several case studies (with disappointing follow-ups) he realized that “the big bang of therapeutically induced emotional catharsis” to create learning experiences and changed lives was not working like he wanted it to.

Upon this realization, he focused his concentration on what he was missing in his work. Part of his research was focused on state-dependent learning and recall, as he realized that the epiphanies that his patients experienced in his warm, cozy office were not as useful in the stressful, high-pressure and sometimes hostile day-to-day contexts that brought out their destructive or harmful tendencies.

He began to consider the role of habits, or the continual repetition of behaviors and thoughts in “highly reinforced neural connections.” These habits result in people acting without conscious thought, especially in familiar environments, which explains why the home is often the site for more social errors (insensitive or thoughtless words and actions, especially.)

Changing habits is difficult work because it requires focused attention, something that is particularly challenging when we are tired, distracted, and generally low on will power. Many people end up devouring a piece of cake when they intended to drink healthy juice. Eating the piece of cake will happen automatically, he says in an example, whereas drinking the vegetable juice will not be an automatic response, only considered (or remembered) after the cake has already been consumed.

The author began to change his therapy work guided by three learning principles. First, mental focus amplifies and magnifies whatever we’re thinking about, making it more important to us. Second, neural connections forged by repeated focus grow physically larger and stronger, making them prone to automatic activation. And third, the brain can’t not do something—thinking about what you don’t want to do usually reinforces the impulse to do it. He also explains the ways that “prosocial learning” gets subverted based on brain function, particularly by the prefrontal cortex.

He now encourages patients to recognize that “the alarm is not the fire.” When a dysfunctional emotional response occurs (the alarm), it’s crucial to let the next step be assessment, wherein patients ask: Why am I feeling this reaction? This step allows a person to regain perspective via focused attention, and then the third step, instead of an enhanced alarm (fear, anger, violence), can be an “improvement” that will address the real, underlying issue.

Once tailored to an individual’s situation, this script of alarm, assessment, and improvement should be rehearsed regularly, both outside of triggers and in controlled stress simulations. He calls this “blue collar therapy” because its repetition resembles an assembly line. Its mantra is “to get big change, think small,” and like physical therapy with an athlete, it is designed to create muscle memory.

The author outlines the questionnaires and processes that were used with one particular patient to develop the “blue collar therapy” tailored to his own tendencies toward domestic violence, and which can be applied to various dysfunctional emotional responses. He’s found that on average, this training requires practicing the script 12 times a day, for about six weeks, to form the new habits.