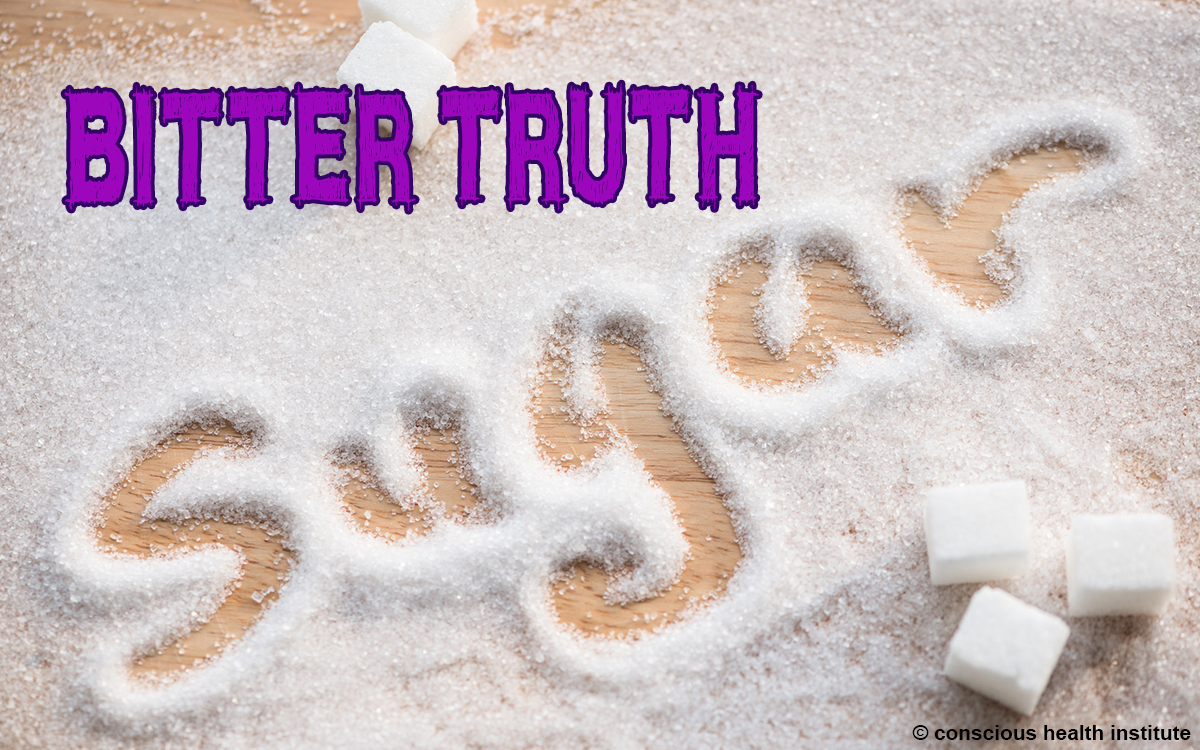 A YouTube video from 2009 and a journal article from 2012, both spearheaded by Dr. Robert H. Lustig, discuss the toxic truth about sugar.

In the video lecture Lustig discusses the role of sugar in America’s current obesity epidemic. He notes that the average American weighs 25 pounds more today than he or she did 25 years ago and that obesity is a problem even among infants.

A large focus of his presentation is on the increased fructose consumption over the past forty years, particularly in the form of sweetened drinks such as soda and juice. He refers to what he calls “The Coca Cola Conspiracy,” or the high levels of sodium in regular soda that increase thirst but are masked (and made palatable) by high sugar levels. Research shows a correlation between sugar-sweetened beverages (including juices) and both body weight and type 2 diabetes.

Many of these drinks are sweetened with high fructose corn syrup, something that is relatively new in our diets. The average American now consumes 63 pounds of high fructose corn syrup per person per year. A higher percentage of our caloric intake is attributed to sugar every year. Twenty-five percent of today’s adolescents consume at least 15% of their calories from fructose alone.

Lustig explains that this is the result of three political winds. First was Nixon’s declaration in 1973 that food should be taken off the political table in presidential elections. He did this by decreasing the price of food. Second was the advent of high fructose corn syrup in 1966 in Japan, and its introduction to the American market in 1975 at a far cheaper cost than sugar. The third is the collective effect of calls from the USDA, American Medical Association and the American Heart Association in the 1970s and 1980s for dietary fat reduction (based on faulty logic, that includes a misinterpretation of the two types of low-density lipoproteins and their varying effects on health.) What they didn’t realize at the time, says Lustig, was that a low-fat diet isn’t really a low-fat diet, because the fructose/sucrose doubles as fat. During this same time, fiber was reduced in many foods in order to increase the shelf life and freezability of processed foods.

Within a biochemistry framework, he gives a variety of examples to show how the risks of chronic ethanol exposure are similar to the risks of chronic fructose exposure, including hypertension, myocardial infraction, dyslipidemia, pancreatic, obesity, hepatic dysfunction, fetal insulin resistance, and habituation/addiction. He concludes that chronic fructose exposure promotes the metabolic syndrome, a collection of symptoms that increase the risk of heart disease, stroke, and diabetes. Like alcohol, fructose is a chronic hepatotoxin (“alcohol without the buzz”) and although the government prohibits children from consuming alcohol, it makes no such provisions for the dangers of fructose in their diet.

In his own pediatric clinic where he works with obese children, Lustig and associates instruct children and parents to eliminate all sugary liquids in the house (leaving only water and milk); to always eat carbohydrates with fiber (as they originally occur in nature); to wait 20 minutes for second portions, and to have children buy their screen time minute-for-minute with physical activity. They find that this has a dramatic effect on young patients’ Body Mass Indexes, but if the first step (removing sugary drinks) isn’t followed, the subsequent steps are not as effective (put another way, fructose ingestion interferes with other obesity intervention efforts.)

He also briefly addresses the importance of exercise and fiber in fighting obesity. Exercise is important in obesity not because it burns calories, but because it improves skeletal muscle insulin sensitivity, reduces stress, and because it makes the tricarboxylic acid cycle (TCA) cycle run faster. Fiber is important in fighting obesity because it reduces the rate of intestinal carbohydrate absorption, increases the speed of transit of intestinal contents to ileum (inducing satiety), and inhibits absorption of some free fatty acids to the colon, which are metabolized to short-chain fatty acids which suppress insulin.

In terms of solutions, he encourages more Food and Drug Administration (FDA) consideration of the risks of fructose, something he argues has been overlooked because fructose is considered “natural,” and because the FDA only regulates acute toxins, not chronic toxins. Also, he says that if the FDA or the USDA were to acknowledge dangerous repercussions of popular American foods, it could reduce our food exports (one of only a few lucrative American exports left) to great economic detriment. He concludes that these economic repercussions prevent these agencies from acting in the best interest of Americans’ health.

Lustwig, along with coauthors Laura A. Schmidt & Claire D. Brindis, revisit the issue in a February 2012 issue of Nature. The article discusses sugar's link to the rise in non-communicable disease, how sugar affects the body in a way similiar to alcohol, and makes suggestions for sugar regulation, including tax, limited sales during school hours and age limits for purchases.